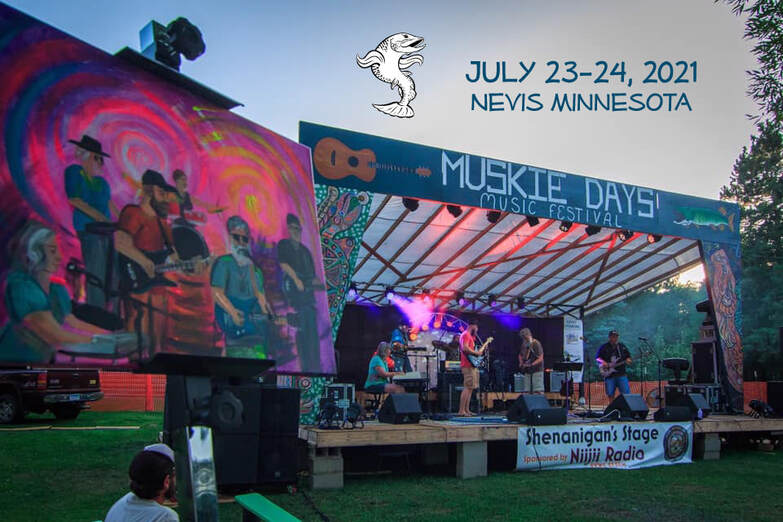 Shenanigan's Muskie Stage
FRIDAY, JULY 23rd
4:30-5:30 pm  Aztec Dancer
6-7pm Comedians Rob Fairbanks ( Rez Reporter) and Jon Roberts  Rob Fairbanks is a Leech Lake Band Member . Rob introduced the Rez Report in 2014 to help people heal through laughter and to bring a positive light to the Rez.  His cohort Jon Roberts is a Red Lake Nation member.
7:30-8:30 pm  David Abeldgaard  Born in Mahnomen and raised in the Fosston/Fertile area.  David has always had a passion for music since he can remember. He loves creating and writing music and normally singing any chance he gets (just ask his family 🙂). His music can be easily created within minutes of picking up a guitar or it can take months of continuation. All of his music though is a feeling or situation that he has gone through in his life at some point. It's a culmination of his life's story that he will continue to write until he is unable.
9 -10:30 pm The Quarterly  Playing the music of The Grateful Dead in the Fargo/Moorhead area since 2007. The Quarterly is Travis Atwood, Pat Lenertz, Trevor Pearson, John Shea, Josh Reinhardt and Jason Will.
11pm -  Corey Medina & Brothers Corey Medina & Brothers are a Blues-Rock band based in Minnesota led by Corey Medina from the Navajo Nation. Corey Medina is a Native American Blues Artist from Shiprock, NM. Shiprock is on the Navajo Tribal Nation where Corey was born and raised. He moved to Northern Minnesota in 2012 . Corey refers to the Brothers as a representation of the relationship he likes to keep with his fellow band mates. Currently the Brothers band consist of Eric Sundeen of Bemidji, MN on Drums and Gary Broste also from Bemidji, on upright bass.
SATURDAY, JULY 24th
12pm-1pm Darren Quam  Darren is a local Favorite from Battle Lake. Playing a mix of original music and unique covers of great songs from artist like: Bob Dylan, The Beatles, Eric Clapton, Grateful Dead, Robert Johnson, and much more!
1:30-2:30 pm Colleen Myhre and the Jaberhooch  Colleen Myhre's (Boss Mama) gritty songwriting is as rawhide tough as it is genuine. On stage, her rustic personality can entertain both a honky-tonk’s hard boiled regulars and tranquil coffee house crowds alike. Colleen Myhre has a low, full voice that is similar in timbre to Lucinda Williams.  The “Boss Mama” solicited the skills and talents of many other musicians.   She affectionately named the collaboration, The Jebberhooch, who play in diverse and openhearted venues. .
3-4 pm Buffalo River Drum and dance demonstration
4:30-6 pm  New Salty Dog  New Salty Dog is a five piece funk/jam band based out of Duluth Minnesota.
7-8 pm War Bonnet  War Bonnet is an original Native American Rock Band from the Ojibwe Reservations of Northern Minnesota. Listen carefully for the great messages in their lyrics.
8-9 pm Hooligan Fire:  Caliab Heiderich ( Fire Performer) is Hooligan Fire. A man of many talents, fire spinning is one of them. Not many words to describe his performance it is a show you have to come see for yourself.
9:30 -10:30 pm  Blue Dog   Blue Dog is an award-winning Native blues band featuring female blues vocals, rocking blues guitar, hot keys and solid rhythm and bass.
11pm -Close  Little Bobby  Little Bobby is from the Red Lake Nation and plays to please the crowd with a great blues vibe.  This is a show you won't want to miss!

Nevis Muni Stage
FRIDAY, JULY 23rd
​4-6PM Paradigm
8-MIDNIGHT Flash Mob - Minneapolis-based FlashMob! has been entertaining audiences throughout the Midwest
and Canada with their contagious brand of nonstop energy, professional style, and unique and refreshing take on songs for over a decade. By covering a wide range of pop, dance, and rock hits will keep you on your toes and on the dance floor.
SATURDAY, JULY 24th
​1-6PM Lydia Rose and the R.A. Boys This band hopes to entertain their audience with an array of genres and their gift of joke telling.
8-MIDNIGHT Maiden Dixie  Energetic. Passionate. Exuberant.  A country rock quintet, Maiden Dixie guarantees an exciting and enthusiastic live performance that is sure to get the audience up on their feet dancing.
​
Iron Horse Stage
FRIDAY & SATURDAY
​8-MIDNIGHT Midbros  Live acoustic music!